Four new workflow features were implemented in version 8.0.0, giving you new ways to build your workflows, with additional new possibilities.

This new action bar is like a dummy action. It does not synchronize parallel actions at all. This feature replaces the usage of a DO_NOTHING custom action, for example; it also has a pause feature, like regular synchronization bars. Another purpose of this new split bar is to be the begin block action of an activity block feature, as illustrated below.

To create a split bar, you have to check the following new setting on the synchronization bar:

Once this option is checked, the appearance of the bar will change as follows:

This new feature will execute the synchronization only for all the actions within the block. This also helps with regrouping parallel actions.

Here’s an example of an activity block: 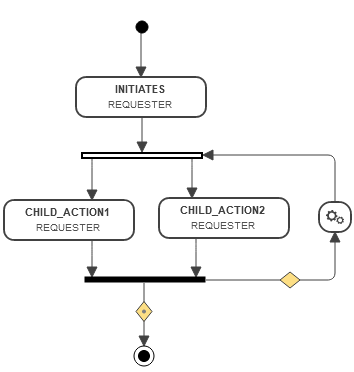 This new feature can be used to automate some of the system actions in your workflow processes to run at a specific frequency or number of times until a condition is met such as an agent that checks or listens for some data then stops when the data is found.

For example, we can use it with the EXECSQL action that will execute a select query for certain information. Once this information is found, we proceed with the rest of the workflow.

In the following image, while the SELECT 1 FROM USERS query doesn’t return a result, it will loop back onto the select. 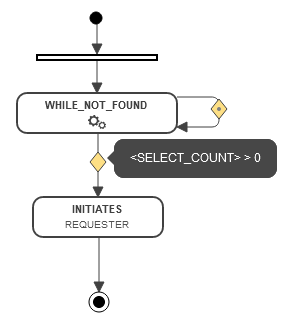 New options are added to each system action to control the looping of your action:

This new feature brings new control over these kinds of situations for system actions. Now, when a system action reaches the execution time limit after it was launched, these actions will be cancelled and flagged as an execution error by the system. The default exception can also be triggered.

The default execution time limit is 600 seconds (10 minutes). This can be configured by modifying the value of the EngineServiceSystemActivitiesTimeOut parameter in the web.config file.

Now, when using this new feature and an exception transition, a system action can be automatically relaunched if it reaches the execution time limit, as in the following example: 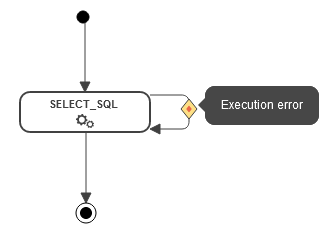 The EXECSQL system action will be cancelled and relaunched automatically if the execution delay of 10 minutes is reached.

We could also have pointed the transition to a manual action if we wanted to add a type of validation to relaunch the action or close it.

I have an existing workflow in v7x that uses the DO_NOTHING custom action. Will DO_NOTHING work in v8 or would I need to recreate the workflow using the split bar as shown before upgrading to v8?

Your custom action DO_NOTHING will still be working in version 8 of WorkflowGen.

The split bar was introduced to reduce the need to create a custom application to reproduce the behaviour of a DO_NOTHING action and it also allows the use of a pause duration setting.